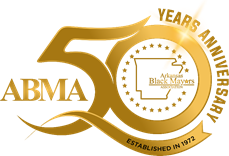 Arkansas Delta Informer Staff — Aug. 17, 2022 — The Arkansas Black Mayors Association (ABMA) will host its 50th anniversary gala on Sept. 10 to honor current and former Black mayors for serving as leaders in communities across Arkansas. The event will be held at The Venue at Westwind, 7318 Windsong Drive in North Little Rock, at 7 p.m. and is open to the public. Tickets may be purchased here.

ABMA President Julian Lott, the mayor of Camden, said while there has been progress in expanding the political power of African Americans across Arkansas, many mayors are dealing with the same issues that existed at the organization’s founding.

“In 1972 there were twelve Black mayors in Arkansas compared to 58 today,” Mayor Lott said. “That’s amazing to see, however issues that our mayors organized around at the ABMA’s founding still exist today—issues such as flooding, drainage, sewer and water—we have much more work to do to help our mayors improve quality of life for their residents.”

The ABMA began with four mayors: Emmitt J. Conley of Cotton Plant who was the first president; Silas Dolphin of Lakeview, vice-president; C.R. English of Menifee who was secretary and treasurer; and George Barnes of Reed, chaplain. The mayors organized around promoting and developing programs; improving educational, economic, health, and social levels of citizens served by the members; enhancing the quality of life for the residents in municipalities served by the association; and providing a mechanism for cooperation and the exchange of ideas among the members in areas of common concern and interest.

Earlier this summer, the ABMA joined the United States Department of Agriculture (USDA) in Forrest City in announcing a $95.9 million investment in 19 watershed infrastructure projects in underserved Arkansas communities. Flooding has caused significant problems, including deterioration of highways, streets and bridges. These projects aim to alleviate flooding of suburban and rural homes, cropland, and grazing lands as well as improve wildlife habitat and water quality. The projects include rehabilitating dams, flood prevention, and watershed restoration projects, and they are part of the Biden-Harris Administration’s implementation of the Bipartisan Infrastructure Law.

For questions about the ABMA or the upcoming anniversary gala, please contact Stephanie Jackson at 501.492.4900 or stephanie@designgroupmarketing.com.