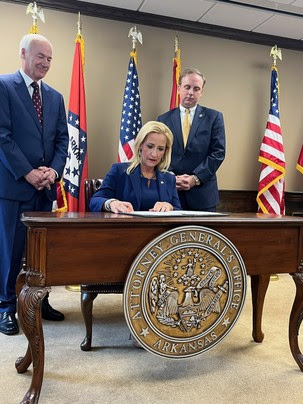 In a ruling largely expected following a leak of the Supreme Court’s draft opinion earlier this summer, Justice Samuel Alito wrote for the conservative majority in Dobbs v. Jackson Women’s Health Organization that it does not confer a right to abortion.

In the 213-page ruling, Alito compared the conservative majority’s decision to roll back Roe v. Wade to a post-slavery court decision to overturn Plessy v. Ferguson. That landmark decision in 1896 by the U.S. Supreme Court upheld the constitutionality of racial segregation under the “separate but equal” doctrine.

“Like the infamous decision in Plessy v. Ferguson, Roe was also egregiously wrong and on a collision course with the Constitution from the day it was decided,” Alito wrote. “(Planned Parenthood of Southeastern Pa. v) Casey perpetuated its errors, calling both sides of the national controversy to resolve their debate, but in doing so, Casey necessarily declared a winning side. Those on the losing side—those who sought to advance the State’s interest in fetal life—could no longer seek to persuade their elected representatives to adopt policies consistent with their views. The Court short-circuited the democratic process by closing it to the large number of Americans who disagreed with Roe 50 years of court precedent.”

Alito later wrote of the Supreme Court’s decision to overturn 50 years of court precedent: “We do not pretend to know how our political system or society will respond to today’s decision overruling Roe and Casey.” Justices Neil Gorsuch, Brett Kavanaugh, Amy Coney Barrett, and Clarence Thomas joined Alito in the majority ruling.

Kavanaugh and Thomas both wrote concurring opinions supporting the court’s decision that there is no constitutional right to an abortion. Thomas, however, went one step further, saying that “the idea that the Framers of the Fourteenth Amendment understood the Due Process Clause to protect a right to abortion is farcical.”

Thomas also noted that although the court declined to disturb substantive due process precedents like Griswold, Lawrence, and Obergefell, he left open the possibility that the high court could revisit settled law concerning contraception, same-sex relationships, and same-sex marriage.

“The Court’s abortion cases are unique, … and no party has asked us to decide ‘whether our entire Fourteenth Amendment jurisprudence must be preserved or revised,’ wrote Thomas. “Thus, I agree that “[n]othing in [the Court’s] opinion should be understood to cast doubt on precedents that do not concern abortion. For that reason, in future cases, we should reconsider all of this Court’s substantive due process precedents, including Griswold, Lawrence, and Obergefell. Because any substantive due process decision is ‘demonstrably erroneous,” (and) we have a duty to ‘correct the error’ established in those precedents.”

In a joint dissent, Justices Stephen Breyer, Sonia Sotomayor and Elena Kagan wrote that the court had already signaled its decision to overturn Roe v. Wade by allowing Texas to “evade judicial scrutiny” after it banned abortion abortions after six weeks of pregnancy.

“And now the other shoe drops, courtesy of that same five-person majority,” wrote Breyer, Sotomayor and Kagan. “Now, a new and bare majority of this Court—acting at practically the first moment possible—overrules Roe and Casey. It converts a series of dissenting opinions expressing antipathy toward Roe and Casey into a decision greenlighting even total abortion ban.

“It eliminates a 50-year-old constitutional right that safeguards women’s freedom and equal station. It breaches a core rule-of-law principle, designed to promote constancy in the law. In doing all of that, it places in jeopardy other rights, from contraception to same-sex intimacy and marriage. And finally, it undermines the Court’s legitimacy,” wrote the liberal justices.

Supreme Court Justice John Roberts issued his opinion joining the conservative majority in support of Mississippi’s 15-week abortion law. However, in the final vote, he sided with Breyer, Sotomayor and Kagan in opposing the majority’s decision to overturn Roe v. Wade.

Immediately after the court’s decision was announced, Rutledge sent out a breathless news release saying that she would end abortions by certifying that the United States Supreme Court had overruled Roe v. Wade. Now, the only exception under Arkansas law is a procedure to save the mother’s life.

“Today the pro-life movement is victorious,” Rutledge said. “I have a long history of fighting for the unborn, and it is my greatest honor to officially end abortion in Arkansas. Roe was wrong on the day it was decided, and today, we can protect every innocent life in Arkansas.”

By certifying Act 180 which was approved by the Arkansas legislature in 2019, Arkansas is now one of 13 states that passed legislation making abortion illegal. Rutledge’s official certification states, “Pursuant to Act 180 of 2019, I hereby certify that the United States Supreme Court has overruled ‘the central holding of Roe v. Wade, 410 U.S. 113 (1973), reaffirmed by Planned Parenthood of Southeastern Pennsylvania v. Casey, 505 U.S. 833 (1992).’

“Therefore, effective immediately, any person who ‘purposely perform[s] or attempt[s] to perform an abortion except to save the life of a pregnant woman in a medical emergency’ will be guilty of ‘an unclassified felony with a fine not to exceed one hundred thousand dollars ($100,000) or imprisonment not to exceed ten (10) years, or both.’ Ark. Code Ann. 5-61-304(a)-(b).”

“In 1973, when I was a young law student at the University of Arkansas, Roe versus Wade came down from the United States Supreme Court establishing abortion as a constitutional right. Today, the court has reversed the original decision and said the decision was in error. There is no constitutional right, and the court returns the issue of abortion to the states.

“For me, this is a turning point for our nation. Since Roe v. Wade was decided, the states that desired to protect unborn life have been prohibited from doing so,” Hutchinson continued. “Personally, I am grateful for the court’s ruling today because I have fought a number of decades for greater protections of the unborn for my entire political life.

“As Governor, I am gratified by the Court’s decision because the people of Arkansas have declared the public policy of this state is to protect the life of the unborn,” said the term-limited Hutchinson, who will leave office at the end of this year.

As a result of Arkansas’ certification and abortion ban, Hutchinson said he is directing the Arkansas Department of Health to enforce the trigger law and conduct the necessary inspections and notifications to assure that any abortion provider is following the law and understands the penalties.

In less than 24 hours since the Supreme Court’s highly awaited decision was announced, dozens of religious groups, policymakers, political action groups, advocacy organizations, individuals, and politicians of all stripes have issued statements offering their views of the controversial decision. At the White House, President Joe Biden called the decision a “sad day for the Court and for the country.”

“Today is a — it’s not hyperbole to suggest a very solemn moment. Today, the Supreme Court of the United States expressly took away a constitutional right from the American people that it had already recognized,” said Biden. “They didn’t limit it. They simply took it away. That’s never been done to a right so important to so many Americans. But they did it. “

In light of the decision, Biden said U.S. Attorney General Merrick Garland has made it clear that “women have the right to travel between states for whatever reason they want – it is no one else’s business – especially the government’s.”

“If a woman lives in a state that restricts abortion, the Supreme Court’s decision does not prevent her from traveling from her home to a state that allows it,” said Biden. “If any state or local official tries to interfere with women exercising this basic right, the Biden Administration will fight that deeply un-American attack.”

Biden also directed the Secretary of Health and Human Services to protect women’s access to critical medications for reproductive health care that are approved by the Food and Drug Administration—including essential preventive health care like contraception and medication abortion.

In Arkansas, the Republican and Democratic frontrunners for governor offered the following statements on the court’s decision.

Sarah Huckabee Sanders: “For decades, this is a day so many of us have prayed for and worked towards. I am thankful for the brave resolve of the six Supreme Court justices who – while receiving death threats and extreme political pressure – did what is right: defending the lives of the most innocent and vulnerable in our society.

As Americans, we value the sanctity of life, and it is in our very nature to protect it. As a mom, I know the love that each of my three children have brought to our family, and, as governor, I will fight to keep Arkansas one of the most pro-life states in the nation.”

Democrat Chris Jones: “This successful attack on Roe will only embolden more attacks on our other constitutional rights. We’re already witnessing an attack on our voting rights, our right to privacy, our access to education, and so much more. At this rate, our children are going to have fewer rights in this country than our parents did. We just can’t let that happen.

This decision from the Supreme Court undermines decades of judicial precedent, and also opens the floodgates for vigilante-style laws that pit neighbor against neighbor and would lead to chaos and a new era of big government-mandated pregnancies.”

Meanwhile, protests are ramping up nationwide following the high court’s decision, including several planned marches over the weekend. Also, the U.S. Supreme Court Building in Washington, D.C., remains closed to the public until further notice “out of concern for the health and safety of the public and Supreme Court employees.” The building has been fenced in and closed since March 2020 due to COVID-19 protocols.