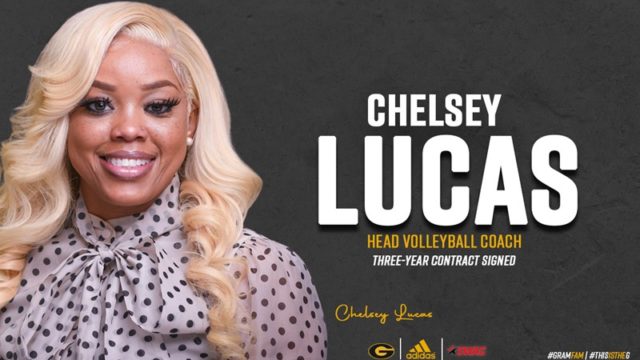 The Arkansas Delta Informer Staff – July 6, 2022 – Chelsey Lucas, the former head volleyball coach at the University of Arkansas at Pine Bluff (UAPB), was fired on Tuesday from her same position at Grambling State University only several months after taking over the top job at the Southwestern Athletic Conference (SWAC) rival.

According to media reporters, Lucas allegedly cut the entire 19-member Grambling volley team after she was hired in February. At the time, all player scholarships were also cut although Dr. Scott apparently supported Lucas’ actions, saying “coaches are empowered to make the decisions they deem necessary to advance their programs.”

However, on Tuesday, Scott and Gallot’s statement made it clear that Lucas was no longer wanted at her alma mater, where she was a former SWAC Defensive Player of the Year and first-team all-conference performer in volleyball.

“The success of student-athletes and their ability to matriculate at Grambling State University is the top priority,” said Dr. Scott. “As we move forward in this transition and commence a national search for the next coach, all volleyball student-athletes who received scholarships for the 2022-23 academic year will keep their scholarships and remain on the team. Walk-ons will also continue to hold their roster spot.”

“It is the responsibility of this institution to make sure that student-athletes are afforded opportunities in a manner compliant with all regulatory organizations,” added Gallot. “That applies to athletics as much as it does to academics.”

A national search for a new volleyball coach will begin this week. Gallot said any additional comments will be held until the conclusion of the investigation.

Although the Grambling roster never played a game with Lucas as the coach, she helped guide the Lady Lions to their first SWAC Championship game in the program’s history in the spring of 2021. Before that role, she was head coach at Alcorn State University for three seasons, helping that program advance to the SWAC Tournament in her final season for the first time since 2015.

Lucas first entered coaching in 2007 as an assistant coach at Terrebonne High School in her hometown of Houma, La., and as head coach of the Bayou Bandits club team. She was then hired as Houma Junior High School’s head volleyball coach in 2009 before taking the same job at Riverside Academy (Reserve, La.) in 2011.

Prior to Alcorn, Lucas also spent three seasons as head volleyball and track and field coach at East St. John High School in Reserve. As a player, Lucas was named SWAC Defensive Player of the Year in 2006, anchoring the backline for Grambling State during its run to the SWAC Regular Season title. A 2006 All-SWAC first-team selection as a senior, Lucas led the conference with 396 digs, highlighted by a SWAC season’s best 43-dig performance at Texas Southern.

Lucas earned her bachelor’s degree from Grambling in 2007, and her master’s from the University of Phoenix in 2011. Following her hiring six months ago, Lucas received a three-year deal with bonus incentives for winning the Southwestern Athletic Conference (SWAC) regular season, national tournament championship, and SWAC and National Coach of the Year honors.

Although Lucas has not spoken publicly concerning her firing, she released the following statement on Tuesday to several media outlets:

“Since I started at Grambling, I have been ordered not to speak to the media. My voice has unfortunately been silenced despite the rumors and accusations about me. As a result, I have not been able to provide my side of the story about the many events that have occurred during my tenure as head volleyball coach at Grambling. I was told today, without notice or any opportunity for discussion, that I was being terminated. When I asked why I was being terminated, the administration was not able to provide me any details about why they decided to fire me.