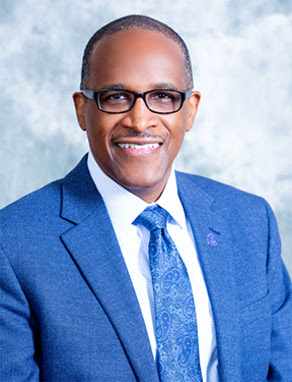 Arkansas Delta Informer Staff – June 10, 2022 – Dr. Lawrence Kimbrough, who formerly led Philander Smith College in Little Rock from 2004 to 2012, is now a finalist for the chancellor’s position at Arkansas’ second-largest university and the flagship of the Arkansas State University (ASU) System.

On Friday, the Arkansas State University Chancellor Search Advisory Committee and ASU System President Dr. Charles L. Welch announced that Dr. Walter Kimbrough was among the four finalists that accepted invitations to visit the campus in Jonesboro and formally interview for the position of chancellor.

Kimbrough, who was widely known for his “Bless the Mic” speaker series during his tenure in Arkansas, served as president of Philander Smith College for seven years before accepting a position as president of Dillard University in New Orleans. Both universities are traditional Historically Black Colleges and Universities (HBCUs), which primarily serve Black students.

The other three finalists to serve as A-State chancellor in northeast Arkansas are Dr. Karen Petersen, dean of the Henry Kendall College of Arts & Sciences at the University of Tulsa; Dr. Todd Shields, dean of the Fulbright College of Arts and Sciences at the University of Arkansas in Fayetteville; and Dr. Lance Tatum, senior vice chancellor for academic affairs, chief academic officer and provost at Troy University in Troy, Ala.

The invitations to formally interview on campus later this month come after recent meetings Welch conducted with the Chancellor Search Advisory Committee. The advisory committee, consisting of 22 members representing faculty, staff, students and community representatives, reviewed 44 applications for the position.

“We received a deep pool of quality applicants, and the four finalists are outstanding higher education administrators with impressive backgrounds in teaching and research who would each bring unique experiences to Arkansas State,” Welch said. “Our constituencies will have an opportunity to visit with them later this month, and we will welcome feedback.”

Each finalist will meet with the advisory committee, faculty, staff, students and community members during interview sessions. Individuals attending the interview sessions will have an opportunity to submit feedback regarding each candidate to the Chancellor Search Advisory Committee. Following the final interview, the advisory committee will meet to discuss the candidates and provide feedback to Welch, who said he hopes to install a new chancellor named by July 1.

On March 31, Damphousse announced his resignation as chancellor of A-State, effective June 30, after completing five years of service at the system’s flagship university in Jonesboro. Texas State University in San Marcos, Texas, earlier announced Damphousse has been named as the sole finalist to replace Dr. Denise Trauth as president on July 1.

Whoever the A-state search committee chooses as its next chancellor will face a myriad of post-pandemic challenges. Last week, the ASU System Board of Trustees approved a $341.5 million budget that includes a 4.6% tuition hike for the upcoming fall semester as its flagship university in Jonesboro and other Arkansas campuses.

The tuition increase comes a month after the ASU System Board of Trustees on May 5 moved forward with a reorganization plan for Henderson State University in Arkadelphia that will provide over $5.3 million in savings over the next two years.

For the upcoming 2023 fiscal year that begins July 1, Arkansas State in Jonesboro budgeted $208.3 million, an increase of 2% with last year, with a 4.6% increase in annualized tuition and fees. Henderson budgeted $51.5 million, which is a decrease of $17 million or 25% compared with a year ago, with no increase in tuition and fees. Tuition and fee rates will rise 3.3% at ASU-Beebe, 4.1 percent at ASU-Mountain Home, 2.2% at ASU Mid-South, 3.4% at ASU-Newport and 2.9% at ASU Three Rivers.

The fiscal year 2023 budget also includes a 2% merit salary increase for all non-classified and faculty; a 2% cost of living adjustment for classified employees; the transitioning of numerous positions from classified to non-classified status; the funding of promotion, rank, and tenure pay adjustments for faculty; and market adjustments for several campus units, notably the University Police Department, Information and Technology Services, and several skill trades within Facilities Management.

In recognition of the work done over the past year emerging from the pandemic, Damphousse had received approval to provide a one-time 1% merit-based bonus to qualifying A-State employees in Jonesboro before the end of the current fiscal year on June 30. That budget also incorporates a change in the ASU System’s flagship university’s overall tuition and mandatory fee structure, and includes the first tuition increase in three years, and only the second increase in the past five budget cycles.

Damphousse said last month that A-State enrollment trends for fall are encouraging with year-over-year comparisons of freshman enrollment currently running 14.5% ahead at this time and a 58% rise in international enrollment. He expects some 1,000 students at A-State Campus Queretaro. A-State continues to have the state’s largest online program with 6,000 students and has doubled its online Master of Business Administration enrollment, he said.

If Kimbrough is chosen as ASU’s chancellor, it would put two Black educators at the head of the state’s two largest universities. Currently, Dr. Charles F. Robinson is the interim chancellor of the University of Arkansas flagship campus in Fayetteville, a role he has held since August 2021. In this role, he leads the university’s land-grant mission to provide opportunity and transform lives through education, research, and service.

In April, the committee began its search for the next chancellor with the launch of a search website, which includes the position description, an overview of the phases of the search process and other relevant information. According to the website, candidates for he tposition to lead the state’s largest university and its 29,000 students must submit their application by July 8, 2022.

Since leaving Philander Smith, Kimbrough has been president of Dillard University since 2012 and announced last year that he would step down this month to pursue other opportunities.