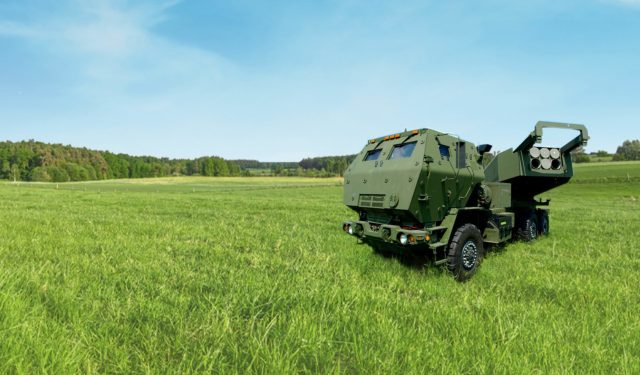 According to the Pentagon, the M142 HIMARS system allows for the launching of multiple, precision-guided rockets. Along with the HIMARS system, the department is also including the Guided Multiple Launch Rocket System to be used with HIMARS. Those rockets are capable of hitting a target more than 40 miles away.

Exactly three years ago, following a visit with Lockheed Martin officials at the Paris Air Show, Gov. Asa Hutchinson and executives with the nation’s largest defense contractor announced plans to invest $142 million in its Camden facility in Arkansas, which will add 326 new jobs by 2024. These newly created jobs are growing the Camden facility workforce from approximately 700 employees to more than 900 employees in the next few years.

The $142 million capital investment supports new construction and improves on existing facilities for products, new machinery and equipment important to the defense of the U.S. and allies. Established in 1978 as the home of the Multiple Launch Rocket System (MLRS) production program, the Lockheed Martin Precision Fire team manufacturers the MLRS launcher and family of munitions, which includes the Guided MLRS Unitary Rocket. It is home to the Tactical Missile System (TACMS) missile, and the (HIMARS) launcher, which fires both MLRS rockets and TACMS missiles.

The Patriot Advanced Capability-3 (PAC-3) hit-to-kill air defense missile is also manufactured at the sprawling Calhoun County military-industrial site, along with the Terminal High Altitude Area Defense (THAAD) Weapon System, including the launchers and fire control/communications units. All of these systems are combat-proven, company officials said.

At the Pentagon press conference today, Kahn said the HIMARS system also provides increased precision for the Ukraine military. According to the Pentagon, the multimillion-dollar package will contain longer-range systems, specifically HIMARS and munitions, that will enable the Ukrainians to strike key targets more precisely on the battlefield from a greater distance inside Ukraine and to help them repel Russian advances.

These systems will be used by the Ukrainians to repel Russian advances on Ukrainian territory, but they will not be used against targets in Russian territory.

“These are precision guided systems with extended range,” he said. “For high value targets, that, that allows them to keep some of the pressure off of Ukrainian forces on the front, we think these systems will be very useful.”

To ensure the most rapid delivery of HIMARS systems to Ukraine, Kahl said DOD pre-positioned systems inside Europe in anticipation of the president’s decision to approve their transfer to Ukraine. Before that transfer happens, Kahl said, the U.S. will provide training on the system to both Ukrainian users and maintainers.

“These, of course, are systems that the Ukrainians need to be trained on,” he said. “We think that’ll take around three weeks. They need to know not just how to use the systems, but, of course, how to maintain the system — so, think of logistics, maintenance, things like that. So, it’ll be a number of weeks until that training is complete.”

The latest equipment package for Ukraine will likely not be the last, Kahl said.

“We will continue to closely consult with Ukraine and surge additional available systems and capabilities in support of its defense,” he said.

Since the unprovoked invasion of Ukraine by Russia on Feb. 24, the U.S. has provided $4.6 billion in assistance to Ukraine. Recently, Congress approved, and the president signed, an additional $40 billion in support to Ukraine — $8 billion of that is for additional presidential drawdown authority.

But the U.S. isn’t the only nation helping the Ukrainians defend their sovereignty.

“Even as we continue to provide vital assistance, I would be remiss if I failed to recognize and commend our allies and partners from more than 40 countries who have joined us to continue supporting Ukraine with heavy weapons, munitions and other vital security assistance,” Kahl said. “Our support for Ukraine and that of the international community remains unwavering.”

During a background press conference today at the White House, senior administration officials said the weapon systems will be used by the Ukrainians to repel Russian advances on Ukrainian territory, but they will not be used against targets in Russian territory.

The second objective outlined by President Biden is that we do not seek a war between NATO and Russia.

“The President has been clear we will not be directly engaged in this conflict, either by sending American troops to fight in Ukraine or by attacking Russian forces,” White House officials said. “What we are doing is exactly what President Biden told President Putin and what President Biden said publicly many times we would do if President Putin attacked Ukraine, and that is provide security assistance to the Ukrainians that is ‘above and beyond. what we were already providing to help defend their country.

“To that end, we are not encouraging or enabling Ukraine to strike beyond its borders.  We do not seek to prolong the war just to inflict pain on Russia.”