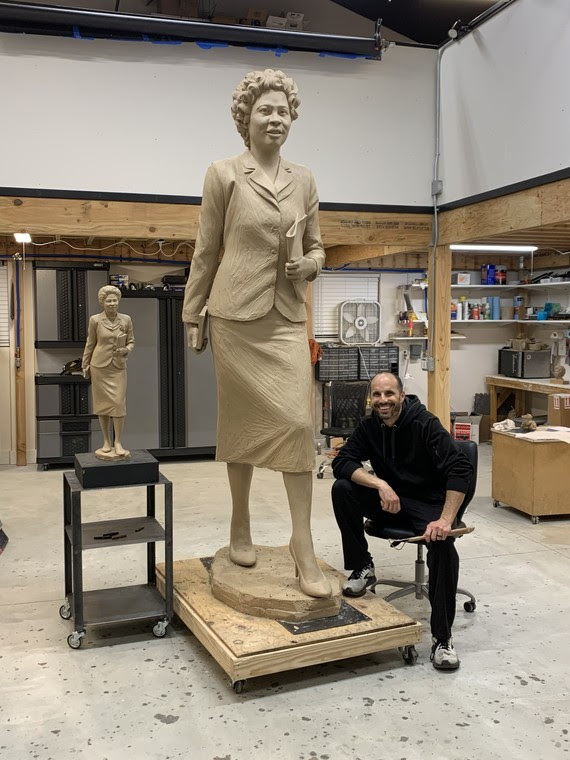 BCN Staff – April 25, 2022- The public is invited to visit with nationally recognized sculptor Benjamin Victor on this week as he works on the sculpture of Daisy Gatson Bates that will be placed in Statuary Hall in the U.S. Capitol at the Windgate Center of Art + Design on the campus of UA Little Rock.

The hours are 3- 7 p.m. on Monday, April 25; from 1-5 p.m. on Tuesday, April 26 through Thursday, April 28; and from 1-3 p.m. on Friday, April 29. Victor will be working on the sculpture at Windgate Center, 2801 South University Avenue in Little Rock. Groups can be scheduled for specific times by emailing Amber Crawford at amber.crawford@sos.arkansas.gov.

Victor was commissioned by the National Statuary Hall Steering Committee and the Arkansas Capitol Arts and Grounds Commission to create a 7-foot-6-inch bronze sculpture of Daisy Gatson Bates, a renowned civil rights activist. Victor is working on the clay model from which the bronze statue will be cast. He brought the model from his home and studio in Boise, Idaho.

He will join Arkansas artist Kevin Kresse on Wednesday, April 27 from 5-7:30 p.m. at the Windgate Center for a reception hosted by the Political Animals Club of Little Rock where both will speak about the Statuary Hall project. Kresse has been commissioned to create the sculpture of Johnny Cash. Reservations are required for the event here, which costs $25.

During the 2019 legislative session, SB 75 by Sen. David Wallace, R-Leachville, was approved by a vote of 33-0 with no debate. Wallace first introduced his legislation to replace two U.S. capitol statues with Daisy Bates and Johnny Cash in late January, but the proposal stalled for several weeks as other lawmakers offered competing bills to replace the statues of deceased Arkansans U.M. Rose and James P. Clarke at the National Statuary Hall Collection in Washington, D.C.

For example, Walmart’s Sam Walton, former Sen. Dale Bumpers and other deceased civic, military and business leaders were mentioned as potential replacement statues. After fierce debate, the Senate final settled on Bates and Cash as their top choices in a non-binding vote and both the House and Senate chamber approved legislation that was approved by signed into law by Gov. Asa Hutchinson on April 11, 2019, during a bill signing ceremony at the Governor’s Conference Room at the State Capitol.

“This is occasional that deserves a celebration about Arkansas history, about how we represent ourselves to the nation, so this deserves a moment of focus and a public signed of these bills,” said Hutchinson with his wife, Susan, at his side.

Although the Arkansas lawmakers settled on Bates and Cash for the momentous honor, the legislation did not supply any funding to pay for the commissioning work on the statutes. Only six months after the bills was passed, over $500,000 has already been raised of the $1 million needed to replace the Arkansas’s Confederate-era statues now in the National Statuary Hall

Cash will be the first musician in the Hall. His statue will be placed in the Hall Visitor Center, National Statuary Hall Steering Committee Chairman Shane Broadway said. Bates will be placed next to a statue of Confederate President Jefferson Davis and next to another civil rights icon Rosa Parks. The committee has worked for about a year with the families and officials with the Hall to place and construct the statues.

Bates was a Little Rock civil rights activist who worked to end segregation. The state honors her with “Daisy Gatson Bates Day” on the third Monday in February. Cash, one of the best-selling music artists of all time, is mostly remembered for his unique country music style that embraced rock and roll, rockabilly, blues, folk and gospel. He was born in Kingsland in Cleveland County in Northeast Arkansas and grew up in Dyess in Mississippi County.

The U.S. Congress authorized the creation of the Hall in 1864 and each state is allowed two statues. Up to 5 million people from around the world visit the Hall each year. A push began early in the 2019 session to statues of deceased Arkansans U.M. Rose and James P. Clarke at the Hall.

According to the Encyclopedia of Arkansas History and Culture, Rose was a nationally prominent attorney who practiced in Little Rock for more than 40 years at the Rose Law Firm. He was also a founder and president of both the Arkansas Bar Association and the American Bar Association and was appointed by President Theodore Roosevelt as an ambassador for the U.S. to the Second Hague Peace Conference in 1907.

Today, the U.M. Rose School is a historic school building on the campus of Philander Smith College in downtown Little Rock, which ironically is located at 900 Daisy L. Gaston Bates Drive. On the other hand, Clarke was the 18th governor of Arkansas and a former U.S. Senator. But according to the Encyclopedia of Arkansas and other historical references, he was a defender of white supremacy as a key doctrine of the state Democratic party.