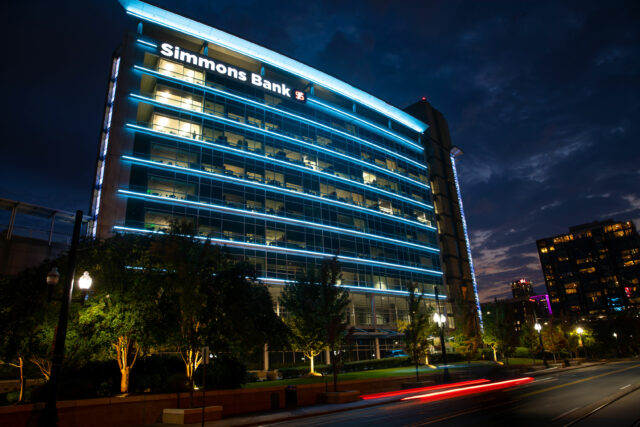 By Delta Informer Executive Editor Wesley Brown – Dec. 19, 2022 – George Makris Jr., who has grown Simmons First National Corp. from a small Pine Bluff-based community bank to one of the nation’s fastest-growing regional financial institutions, will step down as CEO at the end of this year and pass the reins to the company’s current chief operating officer.

Now chairman and CEO of the Pine Bluff banking group that trades publicly on the Nasdaq Stock Exchange, Makris will assume the role of full-time executive chairman, effective Jan. 1, 2023.  Mr. Makris has been the director of the Pine Bluff bank since 1997 and has served as its CEO since 2014.

Taking over as Simmons’ new CEO is Robert “Bob” Fehlman, the Pine Bluff banking group’s current president and chief operating officer. Fehlman has worked for Simmons or one of its affiliates since 1988.  Following the transition in the executive suite, he will lead the development of Simmons’ “better bank” initiatives, and manage the day-to-day responsibilities commensurate with the duties of the CEO.

With the new title of executive chairman, Makris said he will continue to lead Simmons’ boards of directors and work directly with Fehlman and other members of executive management on strategic initiatives and a smooth leadership transition.

“Simmons has developed an outstanding bank management team – one that is deep on talent and experience but also has a long runway ahead of them,” said Makris. “I am, therefore, very proud that our organization will be making these changes now to provide expanded leadership within the excellent banking team we have built.”

James “Jay” Brogdon, Simmons’ current executive vice president and CFO, will assume the role of president and CFO at the publicly traded Arkansas bank.  Brogdon joined Simmons in 2021 after holding positions at Stephens Inc. and Deloitte.  In addition to his current responsibilities, in his new role, Brogdon will also assume oversight of all revenue production for the SNFC and its primary operating subsidiary, Simmons Bank of Little Rock.

Makris took the helm at Simmons at the beginning of 2014 succeeding J. Thomas May, who held the position as chairman and CEO of the publicly traded Pine Bluff Bank from 1987 to 2014. May was elected to the Arkansas Business Hall of Fame in 2010 when the Arkansas community bank held nearly $3 billion in assets.

After stepping down almost nine years ago, May has served as the first and lone chairman of the Simmons First Foundation, a charitable giving extension of the bank. Since its inception in 2013, Simmons First Foundation has contributed approximately $1.9 million to the communities across the bank’s six-state footprint. The foundation recently established a $3 million endowment to aid environmental conservation and sustainability projects.

After assuming the CEO’s role at the beginning of 2014, Makris quickly began to grow Simmons’ market share through an acquisition strategy that has continued throughout his tenure as the bank’s chief executive. Using the company’s Little Rock-based Simmons First operating subsidiary as its primary acquisition vehicle, Makris’s first deals involved snapping up the former Metropolitan National Bank and Delta Trust & Bank, both longtime Little Rock banking brands that no longer exist.

Following a record number of bank failures across the U.S. amid the Great Recession, Simmons joined Arkansas banking rivals Bank OZK, Arvest Bank and Home Bancshares in snapping up near-bankrupt banks from the huge menu of distressed community banks that collapsed after the worst financial crisis since the 1930s.

During the height of the nation’s post-recession banking crisis between 2009-2012, Simmons under May’s leadership participated in several high bid auctions conducted by the Federal Deposit Insurance Corp. (FDIC) that expanded the Arkansas bank’s footprint into Missouri and Kansas.

Simmons’ final acquisition off the FDIC’s infamous distress bank list was its takeover of Excel Bank on Oct. 19, 2012, after state and federal bank regulators seized the assets and deposit of the Sedalia, Mo.-based bank.  After, Simmons purchased three other community banks through the FDIC auction.

Since then, Makris has kept his foot on the acquisition pedal with key deals in key rural and urban markets in Missouri, Oklahoma, Tennessee and Texas. In late 2016 and early 2017, Simmons announced two significant acquisitions involving Stillwater, Okla.-based Southwest Bancorp Inc. and First Texas BHC Inc. in Fort Worth, Texas, together valued at more than $1 billion.

Those deals, which closed in October 2017, officially pushed Simmons over the $10 billion asset mark –the key financial touchstone established by the Dodd-Frank Wall Street Reform and Consumer Protection act as the regulatory baseline between super-community banks and larger regional banking groups.

During the second quarter of 2019, Simmons First completed its acquisition of St. Louis-based Reliance Bancshares Inc. in a $214 million cash-and-stock deal.  A few months later, Simmons announced the acquisition of privately held Landmark Bank of Columbia, Mo., in an all-stock deal valued at nearly $435 million. Bank officials said the deal will allow the Arkansas regional bank to bolster its recently expanded operations in Missouri, Texas, and Oklahoma. Landmark Bank and Reliance together gave Simmons access to dozens of new branch locations sprinkled across key rural and urban markets in Missouri.

The Landmark deal also consolidated Simmons’ growth to the north, the Columbia, Mo., family-owned bank also has branch locations in southern Oklahoma and northern Texas. Those banks also fit seamlessly with Simmons’ new branch locations acquired through the earlier acquisitions of Southwest Bancorp Inc. in Oklahoma and First Texas in Fort Worth.

In June 2017, Simmons First announced a double acquisition to acquire Landmark Community Bank in Collierville, Tenn., and Triumph Bank in Memphis. At the close of that deal in October 2021, those banks had assets of nearly $2 billion and grew Simmons’s total value to nearly $23.3 billion.

A month later in November 2021, Simmons announced its biggest acquisition in a cash-and-stock buyout of Spirit Bank of Texas, allowing the Arkansas regional bank to expand its footprint into the lucrative Houston market.  After completing that key acquisition, Simmons ended 2021 with nearly $28 billion in assets, $14.3 billion in loans and $22.1 billion in total deposits.