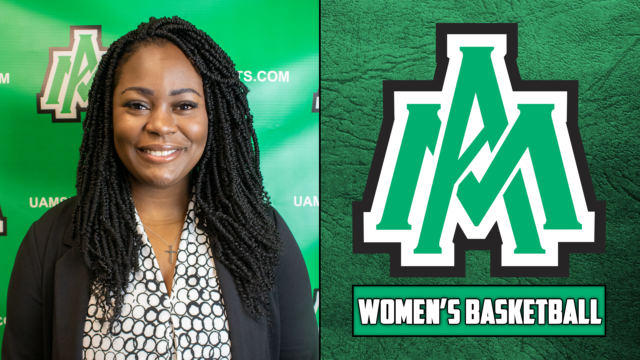 By Arkansas Delta Informer Staff – May 26, 2022 — The University of Arkansas at Monticello (UAM) will kick off 2022 with a new assistant coach who has a strong recruiting background and game experience.

“I am so excited that Coach Webb will be joining us”, said Midlick. “I was impressed with her even before I began looking for a coach to join me. She is a proven recruiter and floor coach. Just as important, she is a person of high integrity. She has a passion and enthusiasm for the game of basketball, and is a rising star in our profession. I’m looking forward to having the UAM community meet her.”

While at TRC, Webb coached a pair of record-breaking Lady Raiders teams. The Lady Raider had a combined 52-2 record over two seasons. During the ’21-’22 season, the team finished the regular season 27-0, spent 6 consecutive weeks being ranked #1 in the nation (NJCAA D1 Poll), and finished in the NJCAA Sweet 16 at the National Tournament.

“I’m so happy to be at UAM!”, said Williams. “I’m super excited to work with Coach Midlick. He’s a legend in the women’s basketball world. I’m probably most excited about the team though! All the returning and incoming athletes have been great so far, and so welcoming. These ladies are ready to work, and that’s what I love to see. Coach Midlick’s vision and plan of growing in the classroom, on the court, and in the community is literally second to none! I’m just beyond grateful to get the chance to be a part of this journey with this UAM family!”

Prior to TRC, Webb coached at Doane University (NAIA D1) in Crete, NE. While at Doane, Webb served many roles including assisting with the varsity team and being the head coach of the JV team. Webb began her collegiate coaching at Western Illinois University (WIU) in Macomb, Ill. She served as the team’s graduate assistant coach.

She spent the 2018 and 2019 summers with the Stanford University’s Women’s Basketball Program under Coach Tara VanDerveer. With Stanford, Webb served as an Elite Camp Leader for both summers for multiple camps. Webb received her master of science in kinesiology, and sports management (2018) from Western Illinois University, her Bachelor’s degree in exercise science (2016) from William Woods University, and her associate’s degree in pre-sports medicine (2014) from Three Rivers College.

The UAM women’s basketball program will be back in action for the 2022 season on Nov. 11. They open up the season in Fayette, Iowa as they travel to Upper Iowa University for a tournament opener against Lincoln Memorial University. The game is set to begin at 5:30 p.m.