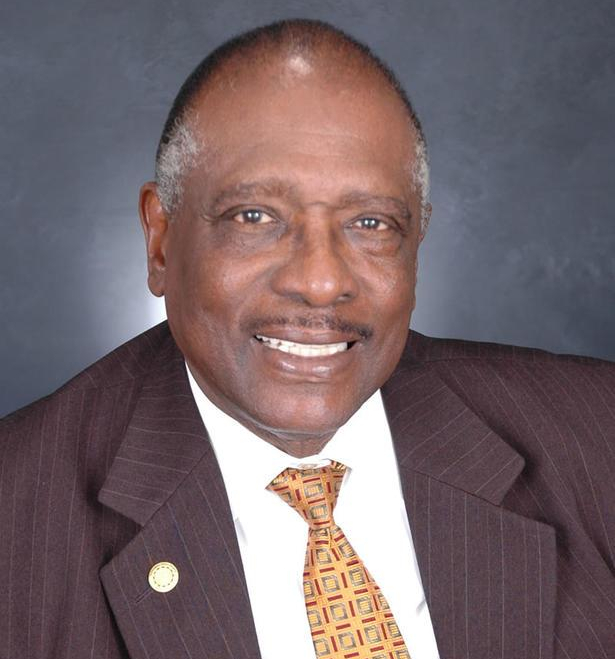 By Arkansas Delta Informer – Oct. 20, 2022 – Funeral services for longtime University of Arkansas at Pine Bluff (UAPB) Chancellor Lawrence A. Davis Jr., will take place on Saturday, Oct. 22 at 12:30 p.m. at the H.O. Clemmons Arena inside the UAPB HPER Complex.

Davis, chancellor emeritus at the state’s largest Historically Black College & University (HBCU) passed away on Saturday, Oct. 15. He served as UAPB chancellor for 21 years, and leaves to cherish his memory two children, Sonya Davis Cole and Lawrence A. Davis, III; nine grandchildren; and one great grandchild. His wife, Ethel Grant Davis, and a daughter, Catherine Davis Harvey, preceded him in death.

Visitation services will be held Friday, Oct. 21 from 4:30 p.m. to 7:00 p.m. at Pilgrim Missionary Baptist Church, 2507 W. Hill St. in Pine Bluff. Expressions of sympathy may be sent to: Office of the Chancellor, University of Arkansas at Pine Bluff, 1200 North University Drive, Pine Bluff, AR 71601. The full obituary may be found here.

“Dr. Davis led UAPB with honor and distinction through two decades of growth and development,” Chancellor Laurence B. Alexander said. “His care, concern, and support of students, faculty, staff, alumni, and stakeholders epitomize his legacy of exemplary servant leadership to his beloved ‘Dear Mother’ and community. I am grateful to him for his unwavering support, guidance, mentorship, and friendship since I joined the university. We continue to express our condolences and pray for his family and loved ones. The Golden Lion Nation is grateful for the legacy of excellence left for us by Chancellor Emeritus Lawrence A. Davis, Jr.”

Dr. Davis’ final public speech and appearance occurred during the 2022 UAPB homecoming festivities a week before his passing. He helped kick off the annual golf tournament with prayer and congratulatory remarks and served as the parade’s grand marshal, a duty he greatly cherished and enjoyed.

His up-close and personal relationship with the institution began at the age of four when his father, Dr. Lawrence A. “Prexy” Davis, Sr., began his tenure at Arkansas AM&N College (now UAPB) as a teacher, later serving as president and chancellor of UAPB. The younger Davis was often heard saying, “I grew up in my daddy’s house,” which, at first may have seemed an odd statement. But for Dr. Davis, the statement had greater meaning as it applied to his father’s 30-year leadership of the university he would also eventually lead. Those lessons learned at home helped Dr. Davis become one of the longest-serving chancellors of any Arkansas university. In his final year as chancellor, Dr. Davis told the Arkansas Democrat-Gazette in 2011, “It really is in my blood, it’s who I am, this is my home…”

The former UAPB chancellor’s professional career began with a brief stint at Mississippi Vocational College, now Mississippi Valley State University at Itta Bena, before he returned to AM&N as a mathematics instructor. Davis swiftly moved through the ranks to assistant professor, associate professor, full professor, chair of the Department of Mathematics and Physics, dean of Arts and Sciences, and dean of Liberal and Fine Arts. He received a unanimous vote by the University of Arkansas System Board of Trustees to become UAPB chancellor in 1991.

B. Alan Sugg, president of the University of Arkansas System told the Arkansas Democrat-Gazette in 2011 that there was such a show of support for him that “I felt like if I had not hired him, I would have been looking for a job. I received so many calls and letters from people who wanted Dr. Davis to be chancellor.” He went further to call Davis a “good academic leader who has done a terrific job at UAPB. He has an extreme passion for the university. I consider Dr. Davis a very close friend and colleague.”

Dr. Davis labored to address as many historical concerns as possible, while giving impetus to enhancing the teaching, research and service functions. In record time, Dr. Davis had managed to turn the ship around, stabilize the school’s finances, and raise the morale of the faculty, staff, and students. He oversaw the completion of Henderson-Young Hall, a multi-million dollar facility that houses the School of Business and Management. Under his leadership, the university received a $30 million appropriation from the state to upgrade the campus facilities, which included the construction of Dawson-Hicks and Caine-Gilleland Halls. As a result of the largest state appropriation in the university’s history, Dr. Davis successfully attained his goals for enhancing the service functions of the university.

Additionally, in the early years of his chancellorship, the football program was restored after a two-year ban, and a new coaching staff was immediately hired. Within two years, the team played for the national championship of the National Association of Intercollegiate Athletics (NAIA), Division I. Other historic events that occurred under his leadership include the marching band’s performance at former President Barack Obama’s inaugural parade and the Vesper Choir’s performance tour in Italy.

“Dr. Davis was a visionary leader whose in-depth knowledge, love and care for the advancement of the University of Arkansas at Pine Bluff are legendary,” Vice Chancellor Emeritus Mary Benjamin said. “It was a special honor to join his leadership team as Vice Chancellor for Academic Affairs where innovation and teamwork were encouraged, supported and acknowledged. May his legacy be a trademark for the University of Arkansas at Pine Bluff.”

“I extend my sincere condolences and God’s blessings to the Davis family for the loss of Dr. L. A. Davis, Jr.,” Chancellor Emeritus Carolyn Blakely said. “I have known him since we were both in high school and our schools’ athletic teams competed against one another, attended AM&N College with him, and worked with him at the University for 43 years. There was never any doubt that Dr. Davis expected and acknowledged commitment, dedication, and expert service from those who worked with him to produce graduates who could become productive citizens of their chosen careers and communities. I am grateful to him for his dedicated service to the University, the students, and his community. I will always remember and cherish his legacy.”

“We lost a true giant in Dr. Lawrence A. Davis, Jr., a true giant,” longtime friend Calvin Booker ’79 said. “No greater love can any man have for our university than Dr. Davis and his family for more than 85 years of dedicated service. The Dear Mother Nation says thank you and well done.”

“For more than two decades, I worked under the leadership of Dr. Lawrence A. Davis, Jr., and his passion for the advancement of the university and students was unmatched,” said Liz Strickland, administrative assistant to Dr. Davis. “At his core, Dr. Davis was always an educator, observing every teachable moment for students and employees alike. Working with him for many years provided me with unforgettable memories, life lessons, and friendship. Throughout the years of working together, attending church together, celebrating life’s joys, and supporting each other through life’s woes, Dr. Davis and his wife, Ethel, became extended family and are missed immensely.”

Other signature projects and events credited to Dr. Lawrence A. Davis, Jr., include:

Outside of UAPB, Dr. Davis was heavily involved in the Pine Bluff community and beyond. He served numerous roles with several organizations, including Leadership Pine Bluff; the United Way; the Presidents Board of Advisors on Historically Black Colleges and Universities; the Industrial Foundation; Partners for a Better Pine Bluff; the Merrill High School Restoration Alliance; and the Arts and Science Center for Southeast Arkansas. He was an active member and deacon of Pilgrim Missionary Baptist Church and received Distinguished Alumnus Awards from each of his alma maters.