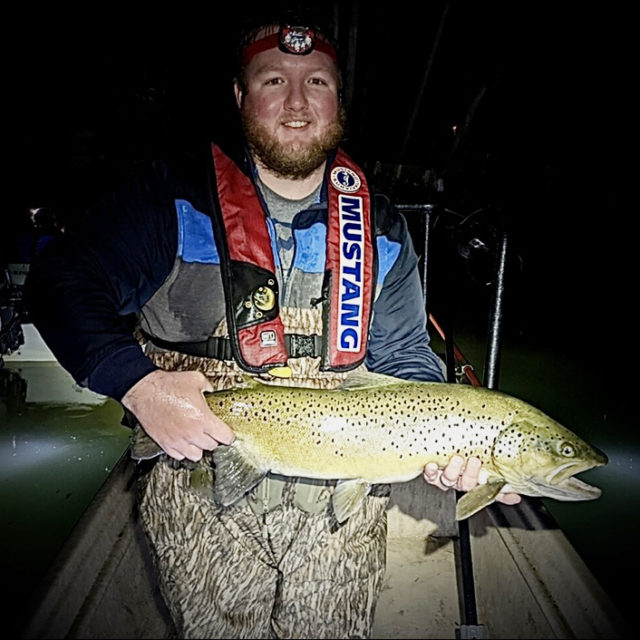 May 26, 2022 — Heber Springs, Arkansas is home to the only self-sustaining population of trout in the state of Arkansas, said Derek Owens, a graduate student of aquaculture/fisheries at the University of Arkansas at Pine Bluff (UAPB).

For almost four years, he has been conducting research on a 30-mile stretch of the Little Red River called the “Greers Ferry Tailwater.” He says this part of the river is unique because fish stocking is not required to maintain the population of brown trout that lives there.

Owens said the UAPB Department of Aquaculture and Fisheries conducts research on trout fisheries to help inform management decisions by the Arkansas Game and Fish Commission.

“Trout fishing is extremely valuable to the Arkansas economy,” he said. “According to the U.S. Census Bureau, trout fishing expenditures in Arkansas total over $180 million annually. Fifty-seven percent of trout anglers are non-residents and 43% are Arkansas residents.”

In his research, Owens has been analyzing the habitat conditions of trout spawning areas in the Greers Ferry Tailwater under the supervision of his advisor, Dr. Steve Lochmann, UAPB professor of aquaculture and fisheries. Specifically, they wanted to determine the microhabitat characteristics of locations that contained brown trout spawning nests.

“These spawning nests are referred to as ‘redds,’” Owens said. “For a female brown trout to create a redd, she must first find a suitable location. She will then turn on her side and begin to rapidly strike the substrate particles on the bottom of the river with her caudal or ‘tail’ fin. This rapid striking motion, paired with the water velocity, dislodges sediment and individual rocks on the bottom of the river and begins to form a pit in the river bottom.”

Owens said that after a female trout has created the pit, she will deposit eggs that a male will then fertilize. Then the female covers the fertilized eggs with other rocks from the river bottom.

“Female brown trout can lay up to 3,000 eggs within a redd. One fish might create several pits and deposit eggs in each of them,” he said. “Redds come in different sizes –some have a length of just two to three feet and a width of two feet, while others can be several yards long and wide.”

What conditions are suitable for trout spawning?

To understand which locations were most conducive for brown trout spawning, Owens and his fellow researchers measured depth, water velocity, dissolved oxygen, temperature and substrate particles at approximately 145 redds in the 2019-2020 spawning season.

“These are the ideal conditions for where you would expect to find a redd in the Greers Ferry Tailwater, as well as in other systems around the world in which wild brown trout spawn,” Owens said. “Many of these other systems are found in Europe and contain native populations of brown trout – their microhabitat characteristics really don’t differ from those of the Greers Ferry Tailwater.”

Owens said his team also wanted to determine whether brown trout spawned at one or two primary shoals or if they spawned in a wide variety of locations with suitable depth, water velocity, and substrate. For this part of the study, they surveyed the river in two-week increments starting in October 2020 and ending in February 2021.

“Every two weeks, we would work our way from the Greers Ferry Dam all the way down to the Monaghan Womack Highway 305 Access,” he said. “It took us about three days to complete all 30 miles of the tailwater. Each redd that was encountered was georeferenced with a Trimble TDC 150 GPS unit.”

Owens said the GPS unit was crucial to the study because it was accurate to about four inches.

“We had several redds that were less than a foot away from each other and sometimes overlapped each other,” he said. “This Trimble unit allowed us to easily distinguish between redds that were very close to each other. By recording a GPS location and looking for redds in two-week time periods, we were able to look at a full spatial and temporal – or the when and where – distribution of the 2020-2021 spawning season.”

Redds appeared in small quantities during the first week of October 2020. The bulk of the brown trout spawn occurred from the middle of November through the end of December, with the peak being in the first half of December. Feb. 6 was the last date the research team found any redds.

“We found a total of 2,417 redds at 27 different shoals throughout the Greers Ferry Tailwater,” Owens said. “Our study concluded that brown trout didn’t spawn at just one or two locations, but anywhere that microhabitat conditions were suitable.”

Owens said the Arkansas Game and Fish Commission (AGFC), which funded the project, has been very supportive of his work.

“Many people have helped me along the way with this project,” he said. “Joseph Kaiser, a UAPB alumnus and current AGFC trout biologist, was a huge help with this project. Also, current UAPB graduate student Jamie Kindschuh helped me many times over the past few years. The UAPB School of Agriculture, Fisheries and Human Sciences provided me with a great opportunity to work on a unique project.”

In a recent AGFC press release, Christy Graham, the agency’s trout program coordinator, said the work completed by UAPB for the AGFC on spawning habitat in the Little Red River will be critical in moving forward with the next management plan.

“These results have implications for just about every aspect of the future management of the fishery,” Graham said. “I anticipate us using a lot of this data to form actions for the next management plan revision, which is due to begin soon.”

The University of Arkansas at Pine Bluff offers all its Extension and Research programs and services without regard to race, color, sex, gender identity, sexual orientation, national origin, religion, age, disability, marital or veteran status, genetic information, or any other legally protected status, and is an Affirmative Action/Equal Opportunity Employer.