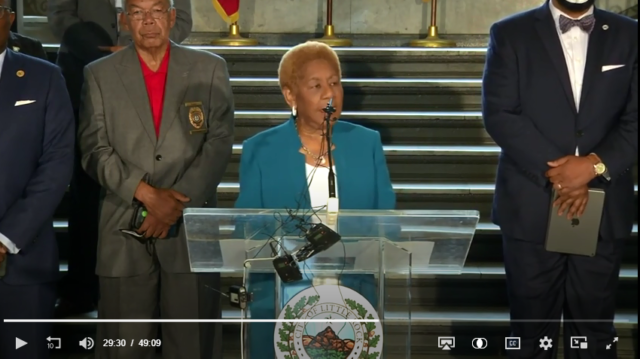 Delta Informer Staff — May 1, 2022 — Two of Arkansas top Black mayors have decided to collaborate with local police departments to seek answers on public safety and increasing violence in Central Arkansas.

On April 13, Mayor Frank Scott, Jr. and Mayor Shirley Washington of Pine Bluff and leaders in the Little Rock and Pine Bluff Police Departments announced they would provide a weekly update on measures taken to promote municipal cooperation regarding public safety in both communities.

During a joint virtual press conference on YouTube.com and public access TV, Scott and Washington provided their first updates concerning measures they plan to take to promote municipal cooperation regarding public safety in both communities. In his remarks, Scott offered that the City of Little Rock would hold the ongoing weekly updates to keep the public apprised of efforts to resolve rising the city’s rising crime rate and violence.

“As you know, since Feb. 1 when the City of Little Rock declared a public health emergency, we have been committed to having weekly briefings on public safety here (city) since that time to update on what we are going to combat crime; what we are doing to reduce crime; and what we are doing in a very collaborative effort both in proactive policing and prevention and intervention efforts to the root causes of crime,” said Scott, who was backed by Little Rock Police Chief Keith Humphrey and other city police executives.

“Little Rock is not alone in this fight, cities across the country and as well as right here in our state are all experiencing in increase in crime. One of those cities is our sister in Pine Bluff, our neighbor to the Southeast,’ stated Scott, who was recently named national president of the African American Mayors Association, the nation’s largest Black mayor association based in Washington, D.C.

For her part, Washington said during the press conference that all citizens deserve to live in a safe community. She further stated that such collaborative efforts between cities should focus on youth without the threat of “this acquaintance violence that we are faced with.”

“This is crucial to me, and not just as mayor, but as a common citizen and most especially as a former schoolteacher and former school administrator,” said Washington, who was flanked by Pine Bluff Police Chief Lloyd Franklin. “Evidence shows that crime that we are addressing is not unique to our communities, it has been a growing challenge through the nation. But we know there are steps we can take to reduce these local incidents.”

As noted by both Scott and Washington, the rising in violence crime amid the COVID-19 pandemic is not a local problem, but a national one. In a recent speech before the National Association of Women Law Enforcement Executive here, FBI Deputy Director Paul Abbate on April 20 said gun violence, homicides, and aggravated assaults, and” are all occurring at an appalling rate, not to mention hate crimes and the persistent threat posed by violent extremists.”

According to the FBI’s 2020 incident-based crime data, which we released late last year — overall violent crime, which includes not only murder-but also assault, robbery, and rape — rose by more than 5%. For homicides along, they jumped nearly 30% in 2020 – the largest single-year increase recorded in 50 years.

“Now to me, percentages can seem abstract, but the actual number is staggering: There were 65,000 additional violent crime incidents in 2020 than there were in 2019. That’s 65,000 more people victimized by violent crime than in the year before. And each one, as we all know, with families, heartbreak, and trauma,” said Abbate.

Abbate gave the remarks, much of which focused on the growing number of female law enforcement officers — which he said now make up 45% of the law enforcement workforce — and their accomplishments, at an event for the National Association of Women Law Enforcement Executives (NAWLEE) in Miami.

The FBI deputy chief, who was confirmed to post in 2018, also noted, however, that the FBI is “concerned” about the threat of rising violent crime. He told the NAWLEE leaders that the FBI is using all of its tools and working strategically with local law enforcement agencies to crack down on violent criminals.

“We’re seeing a disturbing violent crime surge across the country. I know you’re seeing, it too. There’s gun violence, homicides and aggravated assaults, and are all occurring at an appalling rate, not to mention hate crimes and the persistent threat posed by violent extremists,” said Abbate.

“Today’s violent crime situation is taking the lives of too many innocent people, tearing apart too many communities, and denying too many Americans their basic right to feel safe in their own homes and neighborhoods,” continued the FBI deputy chief. “Now I realize I’m preaching to the choir. Because we all know that—at all levels of government—our most fundamental duty is to safeguard people’s right to live without fear of violence.”