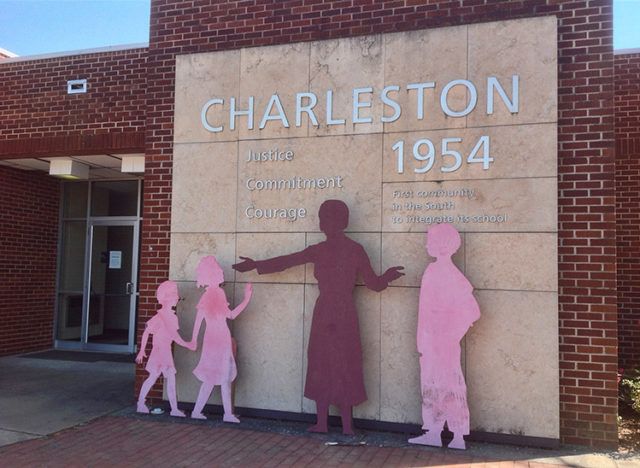 (This story is courtesy of Black Consumer News of Arkansas.)

Arkansas Delta Informer Staff – May 19, 2022 – Although the integration of Little Rock Central High School in 1957 has rightfully garnered both state and national attention, the story of Charleston High School in Northwest Arkansas also has a place in history that needs to be shared.

On Friday, May 20, the Arkansas Historic Preservation Program, an agency of Arkansas Heritage, will unveil a new historical marker on the grounds of the Williams Home in Charleston, located in Franklin County about a 20-minute drive from Fort Smith.

In 1954, three years prior to the integration crisis at Little Rock Central, the Charleston School Board voted to integrate on all levels with very little disruption to daily life or media attention.  The text for the two-sided historical marker reads:

“On July 27, 1954, the Charleston School Board unanimously voted to integrate all grade levels of its public school system, becoming the first in the South to do so. The Board’s decision was in response to the May 17, 1954, United States Supreme Court ruling in Brown v. Board of Education of Topeka, which determined that segregation in public schools was unconstitutional. On August 23, 1954, eleven Black students, including three ninth graders and eight elementary school children, attended class alongside 480 white students. The integration was peaceful, so attracted little notice outside of the area.”

Barbara Williams, one of the eleven black students to enroll in 1954, lived in this house along with her parents—R.B. and Victoria—and her nine siblings: Ruby, Etholia, Sylvia, Fanny, Mildred, Mary, Robert, Richey and Vircy. In 1961, Williams was the first African American woman to graduate from the high school. In 1998, Charleston High School was designated as a National Commemorative Site, the first in the nation, through legislation authored by former U.S. Sen. Dale Bumpers, a native of the small Franklin County community.

The Arkansas Historical Marker Program, established in 2017 by Arkansas Heritage, is another way the division is fulfilling its mission to preserve and promote our state’s valuable cultural and historic resources.

“The markers commemorate the past by acknowledging the historically significant people, places and events that have shaped our state and confirm the importance of educating the public about these Arkansas treasures,” Arkansas Heritage officials said a news release. “Even though national and state events are sure to be recognized in the marker program, local history is just as important and having communities come together in this endeavor is rewarding and beneficial for our state as a whole. The Historical Marker Program creates a visible and lasting tribute to our history, heritage and shared identity as Arkansans.”

Arkansas Heritage was created in 1975 but became a division of the Arkansas Department of Parks, Heritage and Tourism under Gov. Asa Hutchinson statewide restructuring plan in 2019. The division now oversees eight agencies with unique heritage focuses under the its umbrella, including the Arkansas Arts Council, Arkansas Historic Preservation Program, the Delta Cultural Center in Helena, the Old State House Museum, the Arkansas Natural Heritage Commission, the Mosaic Templars Cultural Center, the Historic Arkansas Museum and the Arkansas State Archives.

Concerning the Charleston marker event, the Central Arkansas Library System’s Encyclopedia of Arkansas notes that Charleston was the first school district in the former Confederate states to integrate all twelve grades.

Following the May 17, 1954, U.S. Supreme Court decision in Brown v. Board of Education of Topeka, Kansas that deemed state laws mandating public school segregation unconstitutional under the equal protection clause of the Fourteenth Amendment, the Charleston School Board made a historic decision. In the spirit of civic obedience, on July 27, 1954, the five-member board—consisting of President Howard Madison Orsburn, George Ferrell Hairston, Archibald R. Schaffer, Herbert E. Shumate, and Homer Keith—voted unanimously to “disband the Colored School and admit the Colored children into the grade and high school when classes open for the fall semester.”

When the fall semester opened on August 23, 1954, in the small town of Charleston (Franklin County), located in western Arkansas about twenty miles east of Fort Smith (Sebastian County) on Highway 22, eleven African-American students attended classes with some 480 white students. Three were enrolled in the ninth grade and eight in the elementary grades. Those outside of the town were unaware that this small school district had made history.

Following the May U.S. Supreme Court ruling, the Charleston School Board and Woodrow W. Haynes, superintendent of Charleston Public Schools spent the early part of the summer persuading civic and business leaders, including the local newspaper, not to discuss the integration plans with any out-of-town news source. The story was not reported to the media until September 13, 1954, by which time black students had been admitted to Fayetteville High School in Washington County. On this same day, Charleston School Board president Howard Madison Orsburn revealed to reporters that Charleston schools had integrated peacefully three weeks earlier. The secrecy surrounding the event may have saved Charleston from the problems that plagued other school districts during the early years of integration.

Economics, not just morality, also played a role in Charleston’s decision to desegregate. Prior to the 1954 integration, the district had paid around $4,500 a year to enroll, transport, and pay expenses for black high school students sent to the all-black Lincoln High School in Fort Smith. The local Rosenwald School provided education for first through eighth grade and was the Charleston black community’s first tax-supported school, but black students wanting to graduate from high school had to be transported to Fort Smith. The 1954 integration decision closed the Rosenwald School, which needed repairs the district could not afford, and removed the necessity of transporting the ninth-through-twelfth-grade students to Fort Smith.

Early in the morning of the first day of classes, August 23, 1954, Superintendent Haynes found a racial slur written on an outside school wall. Determined to achieve a successful merger, he and the janitor cleaned it off prior to the arrival of the students, and no one else saw it. There were, however, a few repercussions from Charleston’s integration. Some schools refused to play Charleston in football because black students were on the team. Also, Charleston was excluded from some band competitions because of black members.

On June 26, 1958, Superintendent Haynes had announced his departure from Charleston, his home town, for a college administrative position in northeast Arkansas. At the July 5 meeting, Schaffer, a member of the school board since 1949, resigned effective July 1, 1958. Orsburn, who had served on the board for many years, also resigned effective the same date. Dale Bumpers, future U.S. senator, and Gene VanMeter were appointed to fill the un-expired positions of Schaffer and Orsburn.

Three years later, the worldwide publicity surrounding the desegregation of Central High School bolstered the determination of a very small group of Charleston segregationists to reverse the 1954 integration. They organized and selected two candidates to run for the school board positions that had become vacant, and they campaigned and advertised extensively. The segregationists’ hopes were extinguished when they were overwhelmingly defeated by a 2-1 margin in the December 6, 1958, election.

As noted, the first two black graduates of Charleston High School were Barbara (Williams) Dotson and Joe Ferguson in 1961. The present-day Charleston School District serves a diverse population that includes students of various races and ethnicities.