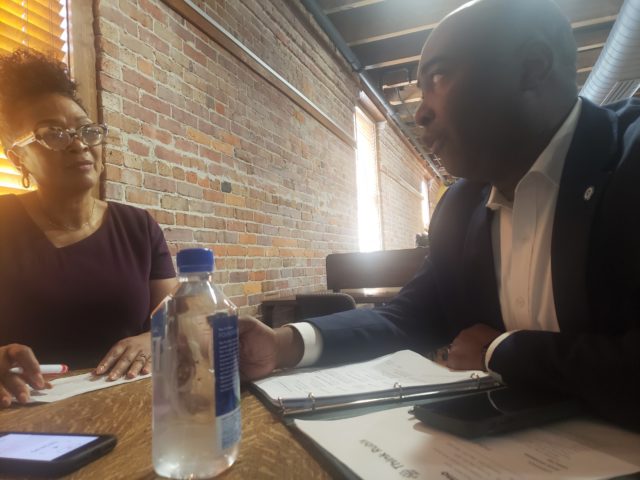 (This story was provided by Black Consumer News of Arkansas)

By Angel Burt & Wesley Brown – May 18, 2022 – In a state where all three branches of government and congressional are notably red, Democratic National Committee Chair Jaime Harrison on Wednesday made the case for turning Arkansas blue.

During a hurried press junket with local reporters at the downtown River Market’s Rock It! Lab, Harrison shared with Black Consumer News of Arkansas that he believed that President Joe Biden is doing a commendable job in the brief time he has been in office. In particular, he said the Biden administration agenda has aided “Black America.”

“I believe that (he) has done a great job of beginning to deliver on those promises,” said Harrison, who was elected DNC chair in late January. “I have to remind people that Joe Biden has only been in office less than two years. As we all know, that’s a long time. There’s lot that has to happen to get in your programs, projects and initiatives through a Congress that is very strictly divided.

“But take a look at what Joe Biden has been able to do. But first of all, think about what he inherited. He inherited four years of a big mess from (former President) Donald Trump,” said Harrison, who lost his own race in the 2020 election against Sen. Lindsey Graham to represent South Carolina in the U.S. Senate.

And it is that same U.S. Senate that Harrison believes will save the day for the Biden administration. He said with a nation’s upper chamber equally divided 50-50 between Democrats and Republicans, part of his job is to help Democrats win two Senate seats so that the president can fully deliver his agenda.

When quizzed if he believes Biden has kept his promise to Black America, who were largely responsible for defeating Trump by over 7 million votes, Harris first noted the success of the American Rescue Plan in delivering COVID-19 relief to Black-owned businesses. He also cited the poverty-breaking triumph of the monthly $300 child tax payment that was not extended by Congress into 2022, along with appointment of more Black women to federal judiciary posts than any other president in U.S. history.

“And for the first time, we are about to get a Black woman on the Supreme Court – a promise that Joe Biden made,” Harrison stated emphatically. “And yes, there are still things he wants to do in terms of voting rights, police reform, and there are a number of things that we need to do, part of it is not because Joe Biden doesn’t want to do it – he’s ready to sign the legislation.

“Right now, we are in a 50-50 Senate, so in order to get these bills to his desk, we got to change the configuration of the Senate with at least two more senators who will help us get past the filibuster and allow these bills to go to Joe Biden’s desk,” said the South Carolina native.

When asked if the White House or the DNC prepared to put political pressure on U.S. Sens. Krysten Sinema and Joe Manchin for not getting rid of the Senate filibuster to pass election reform legislation, the $2.2 trillion Build Back Better legislation, or back other administration initiatives, Harrison bristled at the suggestion that nothing is being done.

“As I tell folks, sometime things go that we all don’t see,” argued Harrison. “I told somebody the other day that, ‘I don’t see you doing this or that,’ and I said, ‘I didn’t see you brush your teeth this morning, but I hope you did,’” he said jokingly. “Joe Biden has brought these folks (Sinema and Manchin) into the White House on a constant basis to make sure that they understand his priorities and agenda.

“But some of the things don’t align with where they are, and so there is only so much persuasion you can do. Ultimately, what we have to do in order to move this ball forward, we need some more votes in the United States Senate, and that is just point blank. Fifty-fifty is not cutting it, we got get a few more,” he said.

With primary elections taking place in Arkansas and several other states, Harrison is traveling across the U.S to rally Democrats to get out and vote in big numbers. He said he believes Democrats can pick up two Senate seats in North Carolina and Pennsylvania. If the Democrats win two more seats and keep control of the U.S. House, Harrison said the nation could see a plethora of reforms on several fronts, including “student loan reform, policing reform, voting reform and all the things we really want in the next package.”

After his rapid-fire interview session with the Arkansas press gaggle, Harrison spent the rest of the afternoon visiting with local Democrats and raising funds party candidates. One of his stops after his press junket was at the new Black-owned restaurant, Sweet Poppa’s Café at 5231 E. Broadway St. in North Little Rock.

Patrons there were asked to pay $25 to visit with the DNC chair and other local politicians, including Little Rock Mayor Frank Scott Jr. and leading gubernatorial Chris Jones. If he wins the primary election as predicted by several key polls, the Arkansas nuclear engineer will be the first Black candidate in Arkansas to be a major party nominee for governor in the Natural State.

With the Democratic primary just ahead on May 24, Harrison’s major goal in visiting Central Arkansas was to fundraise for the party’s general election fund. Democrats in this election cycle have made it a goal to break the supermajority in the state House and Senate and to defeat “Silent” Sarah Huckabee Sanders, party officials said.