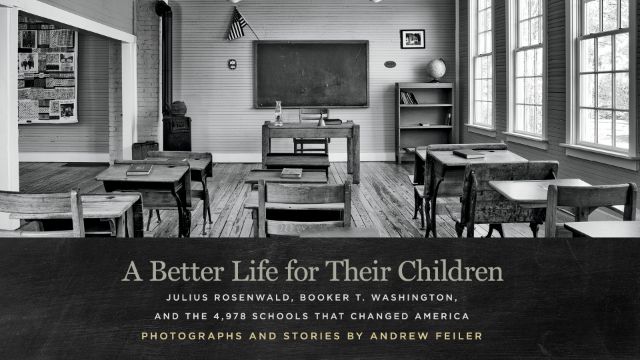 Arkansas Delta Informer – Aug. 20, 2022 – An exhibition highlighting one of the most transformative education projects for Black students during the 20th century was unveiled Thursday (Aug. 18) at the National Civil Rights Museum in Memphis. A Better Life for Their Children: Julius Rosenwald, Booker T. Washington, and the 4,978 Schools that Changed America is a photography exhibition about Rosenwald Schools built in the segregated South from 1912 to 1937.

The Rosenwald Schools project was a monumental partnership of educator and author Booker T. Washington and entrepreneur Julius Rosenwald. Rosenwald turned Sears, Roebuck & Company into the world’s largest retailer, while Washington became the founding principal of Tuskegee Institute. In 1912, the two teamed up to launch an ambitious program that would partner with Black communities to build public schools that would educate more than 700,000 Black children across the South.

Each Black community and school district had to match the grant awarded. After Washington’s death in1915, the Rosenwald Fund was created in 1917 and was managed at Tuskegee. In 1920 the Fund moved to Fisk University in Nashville, Tenn.

The biggest legacy of the fund was the rural school building program, which helped to build over 5,000 schools across the South. In Arkansas, 389 school buildings, which included schools, shops, and teachers’ homes, were built between 1917 and 1932, mainly in the state’s southern and eastern counties. The new schools brought opportunities never seen before to the state’s African-American students and allowed them to learn more than they ever would have thought possible.

According to the Encyclopedia of Arkansas, R. C. Childress of Little Rock was the Rosenwald building agent during most of the time of the fund’s existence. An earlier building agent, Percy L. Dorman of Pine Bluff’s Agricultural, Mechanical and Normal College—now the University of Arkansas at Pine Bluff—served from 1918 to 1922. Childress was the first-degree graduate of Philander Smith College and the second black employee of the state Education Department.

The responsibilities of the Rosenwald building agent were numerous and included helping the rural community to raise their share of the school’s cost, inspecting the new buildings, promoting good will between the races, and meeting with and influencing public school officials. Meeting with the local public school officials was critical in order to allow the Rosenwald Fund to be able to help in the construction of a modern school building. Although the grant for the Rosenwald Fund helped with the construction of the building, the local community really provided the enthusiasm to see it through.

Some of Arkansas’s most prominent Rosenwald-funded schools included Yerger High School in Hope, Bigelow High School in Faulkner County, Dunbar High School, and Technology College in Little Rock, and Charleston High School near Fort Smith. However, as integration occurred across Arkansas, many of the schools fell into disuse in the 1950s through the 1970s and many were demolished, even though they were well built and used the latest innovations in school design for the period. As a result, of the original 389 buildings built across the state, less than 20 survive today, and the surviving buildings are severely threatened.

Captured through the lens of photographer and author Andrew Feiler, the upcoming A Better Life for Their Children photo exhibit is intertwined with interviews with teachers, students, preservationists, and community leaders who reflect on the impact of the Rosenwald Schools. The exhibition is based on Feiler’s book of the same title.

“We often see America’s challenges as intractable, especially those related to race,” said Feiler. “Booker T. Washington and Julius Rosenwald reached across divides of race, religion, and region, and they changed this nation. Their accomplishment speaks to us today. Individual actions matter: we can make America a better place for all.”

Feiler drove more than 25,000 miles, photographing 105 schools, and interviewed dozens to reflect on the program’s impact. The stories include but aren’t limited to the Trail of Tears, the Great Migration, and the Tuskegee Syphilis Study. According to the National Trust for Historic Preservation, only about 500 of those schools exist today.

A Better Life for Their Children is on display until January 2, 2023, and is included with admission. The coffee table book is available for purchase at the museum. For more information, visit the museum’s website.